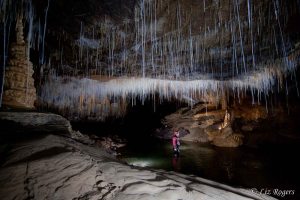 An important difference between the caves in Tassie and those in many other places is the fact that many of the caves here are still relatively pristine – they haven’t been hammered to death by overuse or poor caving practices. This isn’t a cause for complacency. In fact, it makes the caves here more precious and deserving of our efforts to keep them in good condition.

Anyone entering a cave should think about how they can minimise their impact on the environment. Guidelines such as the ASF Codes of Practice are useful and should be familiar to all Australian cavers. However, when it comes down to it, the key thing is to have a commitment to the minimal impact ethos. In other words, be fair dinkum about making an effort to reduce the damage we cause by going caving.

Putting the minimal impact ethos into effect takes practice and creativity, and is a skill that often marks the experienced caver from the novice. There are no hard and fast rules and no recipe for a perfect minimal impact caving trip.

Below are some things worth thinking about

Be conscious that the decisions you make while caving could have a lasting effect on the environment and the enjoyment of others who visit the place after you. The choices may seem trivial, such as where to put your boot down, but be aware that even minor impacts accumulate over time to make big impacts.

Have an open mind about other peoples’ caving practices, but don’t be shy of suggesting alternative ways of doing things if you see other people causing unnecessary impacts. Don’t take it for granted that newcomers to the sport, visitors from interstate and overseas, or even other locals, are switched on to minimal impact practices that may seem obvious to you.

Always think about the best possible route through the passage. If you’re not exploring, look for signs of where others have been, and follow them rather than create new impacts.

Tracks have a habit of getting wider, even if everyone follows the same path. Get in the habit of carrying some thin cord for track marking, or make the effort of a return trip to do track marking. It’s generally best to use two lines to define the sides of the track and keep the route as narrow as practicable. Track marking can be used to protect undisturbed mud floors as well as more obvious features such as sparkling flowstone.

Be fit for the trips you do and cave within your limits. Tired cavers tend to blunder about and damage things (caves and their own bodies).

Pushing every lead to the bitter end might yield a breakthrough, but is more likely to trash the cave without yielding anything. Take time to think about all the potential options, including not going any further if doing so will damage the cave.

Nothing can beat the buzz of cave exploration, but avoid the temptation to rush through new passages, even if it is a 10 m wide borehole and you can hear a river round the next bend! Choose where you walk, climb or crawl with care, as you will be setting important precedents. Bootprints across flowstone or pristine mud will be taken by others as a green light that it’s okay to follow suit. Explorers have a responsibility to install track marking and other protective measures.

Be prepared for the possibility of having to defecate while underground. Big wall climbers do it in paper bags. Back in the old days they used to toss the bag off the cliff; these days it generally goes in a PVC tube or other sealable container and gets packed out. Sturdy plastic bags are handy and take up virtually no room in a caving pack. In some caves it’s worth considering taking a urine bottle – most plastic drink bottles can be crushed down and are almost impossible to break.