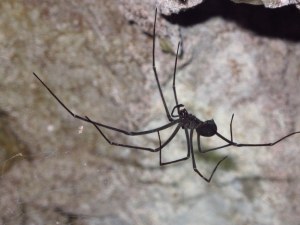 Caves are one of the most commonly known forms of a wider spectrum of landforms that have been derived by the gradual solution of carbonate rocks such as limestone, dolomite or magnesite: rocks that are derived from the accumulation of marine organisms (shells, corals etc.) that formed as sediments on the sea floor. These marine sediments consolidated over a long period of time forming carbonate rocks that were subsequently uplifted forming parts of the land mass areas of Tasmania and many other regions of the world. The subsequent carbonate solution processes are very slow, usually taking several millions of years; the solution results in a range of large broad scale landforms and the smaller localised landforms including subterranean cavities that we know of as caves. The whole suite of landforms formed by the solution process of carbonate rocks, including caves, are collectively referred to as “karst”: a German word coming from the Slavic term “kras”.

Slovenia is considered to be the “home” of karst studies – in a country where 43% of its land area is composed of karst landforms. The very first research of caves and karst in the western world began in the 19th Century, following the discovery of the large inner chambers of Postojna Cave in 1818 in the area that now referred to as the “classic” Karst Region in the mountainous hinterland behind the Bay of Trieste in Slovenia. You can read more about this by turning your Internet browser to:

The natural waters (runoff, surface streams or seepage) that enter carbonate rock are all slightly acidic (and referred to as “charged” or “aggressive waters”); these waters penetrate through points of weakness in the rock: into tiny cracks, small joints or bedding planes. Combined with the fact that run off water or stream water has a forceful action of erosion, corrosion and abrasion, due to gravity, water mass or volume and its sediment load of fine sands or gravels, the aggressive water can (over time) enlarge its point or entry to form wide vertical openings or horizontal stream conduits or channels; these widened openings are the common access points for cavers going caving. Caves and cave chambers are also simply formed by rainwater that seeps down through mulch, soil layers and decayed rock, percolating into miniscule cracks and joints in the carbonate bedrock. The process of rock solution by seepage waters is aided and abetted by a number of factors:

This is one important reason why it is imperative that soils above carbonate rock surfaces (limestone, dolomite or magnesite) are not disturbed by surface land use activity, in order to maintain this naturally slow and gradual solution process including the formation of caves with the calcium carbonate growths that many cave visitors seek to view. One of the most commonly known aspects of caves is their visual beauty, due to their natural internal formations (sometimes referred to as cave decoration). These formations or cave decorations are formed by the precipitation of the same calcium carbonate that was dissolved from the carbonate rock by the seeping soil waters.

Common examples of cave decoration are the extremely delicate and thin tube like “straws” and stalactites that hang from the ceiling or the usually thicker and more massive stalagmites that grow on the cave floor. Given time, many of these dripping stalactites will eventually extend their growth downwards to meet and join the stalagmite growing upwards: such forms are known as columns. One of the other most common forms of cave decoration are the weird and wonderful twisting or spiralling helictites that grow upwards or outwards from cave walls.

Another common growth from cave walls is the small bubbly and rough textured form known as “cave coral”. There are various formations on cave floors: flowstone, rimstone pools (or gours) and cave pearls that form in pools. Collectively, all these ceiling, wall and floor growing formations or decorations are referred to as “speleothems”. The study of caves is called “speleology”, so cavers are sometimes referred to as speleologists. There are many different aspects of cave study or speleology, just as there are many different areas of science or study. A number of cavers (or speleologists) are primarily interested in caving as a recreational or sporting activity – visiting horizontal caves or using wire rope ladders or single rope techniques (SRT) to descend vertical cave systems to experience the exhilaration of vertical caving. There can be a certain thrill of adventure and excitement about caving, as you are the first visitors to explore new previously unseen cave passages or chambers.

In addition to the exploration of new caves or new extensions of known caves, some speleologists have more specific interests and many cavers involve themselves in photographing cave formations (or speleothems) such as stalactites, stalagmites or helictites. The exploration of caves usually involves surveying and mapping projects to record the cave for posterity, along with some documentation of the different sites, and possible track marking within the caves to conserve and protect fragile formations, sediments or cave biology habitats. (The exciting thing about caves is that there are no two caves exactly the same, and in Tasmania where we have so many cavernous karst areas with so many caves there are always new and exciting discoveries to be made.)

There are many different aspects that can be studied including cave or karst hydrology (water flow, dye tracing disappearing cave waters to find where they re-emerge again etc.); cave meteorology (water temperature, air temperature, air movements and humidity); paleoclimatology (studying past climate by mineralogical and trace element analysis of speleothems); speleochronology (determining the age of caves by dating cave deposits such as sediments and possibly megafauna bone deposits in ancient cave fills or using actual dating techniques on stalactites or stalagmites etc); and biospeleology (the study of life forms in caves).

Biospeleology is one of the many interesting facets of speleology (the study of caves). Although there are some studies of plants (flora) and fungi in caves, the most common cave biological (or biospeleological) study relates to animals (fauna), either vertebrates: (birds, mammals and fish) or the invertebrates (such as shrimps, snails, spiders, beetles, flies, etc.). Many people associate caves with bats, but in Tasmania there are no cave dwelling bats – probably because the air temperature in our caves is not sufficiently warm.

However, there are numerous other vertebrates in our caves, although some animals of these only use caves for shelter. For example, owls sometimes roost in our Tasmanian caves and although there are very few owl remains found, there is plenty of evidence of their presence from owl pellets or owl casts: the regurgitations of undigested small bone fragments, fur and feather of their prey – predominantly small mammal species or small birds that live within the near vicinity, i.e., their flight range from their cave roost site. For this reason alone, some caves can have be important sites, simply because they provide an indication of the range of small mammal species living in that particular cave area and if it is a very old and established roost site, the resulting deposit or accumulation of owl casts may include species that lived there before present times.

Most of the caves in Tasmania are vertical caves, i.e., caves that have vertical entrances. Consequently; many of these caves contain the skeletal remains of vertebrates that have fallen in: birds (such as lyrebirds), frogs or snakes and mammals. Some vertical caves are thought of as “mammal traps”; they often contain masses of skeletal material in various states of preservation including extinct species such as Thylacine or our Pleistocene megafauna: the giant kangaroos, giant wombats and the marsupial lion.

There are no known true cavefish in Tasmanian caves; our only records relate to subterranean ecotypes or varieties of species commonly seen in Tasmanian surface streams. However, we do have a number of cave adapted aquatic invertebrates in our caves, including probable new species of cave adapted forms of Anaspides: the mountain shrimp. The range of invertebrate fauna in Tasmanian caves is very diverse; many of the aquatic (water dwelling) and/ or terrestrial (land-living) species types found in caves are rarely, if ever, seen in surface environments. The truly cavernicolous species often show a range of specialised cave-adapted morphologies (body structures) that enable the species to survive in their relatively stable, totally dark and damp or moist subterranean (underground) habitats with limited input of food sources. Some species are blind e.g., the blind aquatic amphipod from the relatively “new” karst area at Mt. Cripps (WNW of Cradle Mountain) and a similar but small species from the Gunns Plains area (south of Ulverstone), plus the small blind spider recently found in a cave at Gunns Plains.

Although some cave invertebrates may have “seeing” eyes, these are sometimes reduced eyes (smaller in size) and/ or maybe non-functional eyes. Many of these cave invertebrate animals are quite small and the truly cave adapted species have often lost their body pigment and have thinner and/ or elongated appendages (legs and antennae); these species are generally more setose (hairy) and spiny than their surface counterparts: the longer spines being used as extra sensory devices. In similarity with the cave dwelling amphipods, the cave dwelling Anaspides have a range small sensory setae and spines, including spines on their telson (tail part) of unknown function. Some terrestrial cave invertebrates have specialised prey-grasping structures e.g., the meshing chelicerae “teeth” of the cave harvestman or the “nipper” like (lobster-like) pedipalp claws of the pseudoscorpion.

Cave invertebrate species are often described as being cryptic or cryptose because they are very small (sometimes pinhead size or less, e.g., the 0.5mm blind cave spider at Mt. Cripps) or are very difficult to locate (living in cave wall cracks or crevices, or in tiny interstitial cavities such as in between soil particles in the cave floor etc.), so cave visitors need to be careful where they place their feet and hands!) Apart from the more obvious invertebrate species in Tasmanian caves, such as the glow-worm larvae of fungus gnats and the numerous cave crickets, there are a range of small (often cryptic) arachnid species including cave harvestmen and pseudoscorpions. Cave harvestmen (Order Opiliones) and pseudoscorpions (Order Pseudoscorpionida) are eight-legged arachnids, i.e., of the same arthropod group (Class: Arachnida), which spiders (Order: Araneae) and mites or ticks (Order Acarina) belong to. Most of the cave harvestmen belong to the genera: Hickmanoxyomma, Lomanella or Calliuncus, whereas the pseudoscorpions are all species of the tongue-twister genus…. wait for it: Pseudotyrannochthonius. Some of the species mentioned in this introductory section on cave fauna can be viewed in a marked up RFA (Regional Forest Agreement) report that also provides more detailed information on the geology and geomorphology of cavernous karst areas in Tasmania, along with detailed information, references and a glossary related to impacts on cave fauna and their protection requirements. See:

http://daff.gov.au/forestry/policies/rfa/regions/tasmania/environment/cave
For more information on the above or any other aspect of cave and karst research you can write to STC: